What American City Are You?

For "Your" Own Good?

With its insights into the ways people act inconsistently or against what they say they want, behavioral economics can provide useful ideas for incrementally improving management, and self-management. Richard Thaler, for instance, has turned his research into the successful and practical Save More Tomorrow program to encourage employees to put their future raises (or portions of them) toward retirement savings.

Some economists, however, have rushed to apply behavioral economics not to private dilemmas but to public policy, arguing that inconsistent preferences need to be corrected with paternalist government policy. In a smart, careful new Cato Institute study economist Glen Whitman argues that the paternalist notion of "internalities" has serious flaws--flaws analogous to those identified in traditional "externality" theory by Ronald Coase in his breakthrough 1960 paper, "The Problem of Social Cost" (PDF file here). Unlike many people who throw around Coase's name, Whitman gets that paper right and applies it well.

UPDATE: More on behavioral economics at Marginal Revolution. It's a mistake to view the field as primarily about public policy. It isn't. But people who are primarily interested in government policy (pro or con) naturally apply any new social science discoveries to that interest.

Elaborating on an earlier blog posting, my latest Forbes column is on the tough-minded messages of Project Runway. And a couple of pages earlier, Amanda Ernst profiles PR finalist Chloe Dao.

Both my email and some of Dan Drezner's comments suggest that it's better to go with your gut on the ports issue, never mind the facts. Dan and I are supposedly "overly rational." One reader email recommends Malcolm Gladwell's Blink

as a cure for my excessive rationality.

All I can say is my gut reaction was, "This is stupid." And, now that the research is in, I'd say that gut reaction was right--as Glenn Reynolds, among others, has come to agree (the blogosphere at its best). When you've seen enough ill-founded hysteria over foreign ownership, you develop an instinct.

What Would You Do With Six Extra Weeks of Vacation?

That's how much Americans' leisure time has increased since 1965, according to research I discuss in my latest NYT column. No matter how you measure it, we have way more leisure today than 40 years ago. We also have more ways to use it. If you haven't noticed the improvement, you probably weren't a working woman in 1965. Or you're just like most people and spend most of the extra time--about five of six additional hours a week--watching TV.

Jim Glassman has a great piece on what's at stake in the ports flap. I usually quote articles for the benefit of those who won't click through, but in this case I want everyone to read the whole thing. 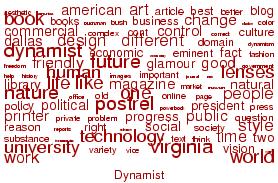 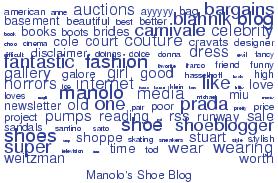 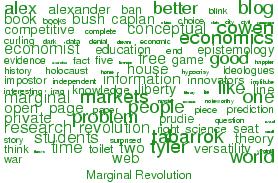 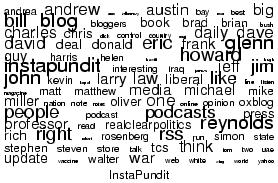 Proof that InstaPundit is all about the links.

They'll turn your word cloud into a T-shirt for $18.

He's Not Making This Up

In the world of cubicles, iPods have become invisible office doors.

A Voice of Sanity

Bravo to Dan Drezner, for his eminently sane post on the current fuss over letting a Dubai-owned company manage pieces of U.S. ports. And kudos to President Bush for standing up for commercial freedom and sound foreign policy. Dubai is a U.S. ally and a rare island of semi-freedom in the Gulf.

On this issue, my friend Glenn Reynolds has again demonstrated his disturbing tendency to congratulate himself for spotting, but not opposing. new expressions of American xenophobia. He has, however, partly redeemed himself by demonstrating that he'll at least consider rational arguments. I don't think bloggers, even big shots like InstaPundit, have a responsibility to comment on every issue. But if you're going to bring them up, Glenn, take a stand. Don't just pander to populist fears under the cover of doing horse-race-style analysis (i.e., "it's a political loser"). You wouldn't take the cheap way out if the issue involved technology.