What has Congress accomplished? A pork-filled highway bill (Is there any other kind?) and an energy bill that's all subsidies plus Daylight Saving Time--everything for which there was an actual policy debate was removed as "controversial." Who, after all, can be against giving money to constituents?

The WaPost wrapup gives a good summary of what constitutes victory--and effectiveness--in Washington:

Shackled for months by a familiar brand of Washington gridlock, President Bush and the Republican leaders in Congress last week suddenly found a key. A long-stalled energy bill, an international trade accord and a massive highway appropriations measure all moved to passage -- handing big victories to business interests and quieting talk that a second-term president was bereft of influence.

This surprising midsummer rush of legislating made clear that the reality of Washington's current balance of power is more complicated than surface appearances. On the most highly charged ideological issues -- the proposed restructuring of Social Security, chief among them -- a unified Democratic opposition has stymied Bush, creating an impression of GOP impotence. On less partisan measures backed by powerful economic interests, Republicans have benefited from enough Democratic support to advance their agenda in expensive and far-reaching ways....

Still, Allan J. Lichtman, a professor of political history at American University, said that while the country has been preoccupied with the "flash and show" over social issues, Republicans are reshaping the policy landscape in favor of a certain brand of big-spending conservatism. "It's an absolutely remarkable performance by Republicans," he said.

Contrary to Lichtman, big-spending Republicanism isn't an alternative to social issues. It's a complement--and one that (I hope) may eventually backfire. By jetisoning any pretense to free-market principles, the GOP is defining itself entirely as the party of the religious right. The subsidies to friends are simply business as usual for whatever party is in power, a tool for fundraising but not for defining party identity.

The LAT's Alex Pham reports on how "traditionally geeky manufacturers are embracing their sensitive side to develop products that evoke feelings, including joy, desire, comfort and nostalgia." Among the examples:

That's what Hannspree Inc. concluded three years ago when the Taiwanese display manufacturer decided to make its own branded TVs. But instead of churning out cheap LCD screens, Hannspree took a different tack. Last year, it launched a line of 100 TVs, each aimed at different emotional targets. One is shaped like a plush puppy, another like a baseball that is actually made of hand-stitched leather.

"If you saw a TV that looked like a baseball, you'd think it's fun," said Michael Galvin, a marketing manager for Hannspree. "And you'd know it's a gimmick. But when you touch it, it's both surprising and reassuring. You don't expect it to be the real thing. But it is, and you remember what it felt like when you held a baseball, you remember when you went to a ballpark. You connect it with whatever baseball means to you. The TV is both visual and tactile, so it's a much stronger impact."

Eventually, people will stop discovering this trend, and it will just be part of the background.

Assuming the president signs the dreadful energy bill, extended Daylight Saving Time is a fait accompli, but reader Michael McDowell made a worthwhile point in an email:

I find it interesting in the debate over extending daylight savings time, how most people feel that their preference is the self-evident correct course of action. I'm over here in neighboring Fort Worth and when I heard of the proposal my reaction was the opposite of yours. My thought was "who would be against that?" Another month of extended daylight after work allows a few more weeks of squeezing in a little golf or a bike ride after 5:00. Personally, I wouldn't mind if it didn't get light until noon and dark at midnight, but I have a co-worker who absolutely hates the morning commute when it's still dark and has a hard time getting her kids awake and off to school when it is still dark.

I'm sure he's right about preferences. If I had to bet, I'd guess that the public is divided 50/50. The policy question is whether the switch will, as advertised, save any energy. Since air conditioning is such a big drain and since the "evidence" is so skimpy, I doubt it.

The Apple Store's Campaign Against Books 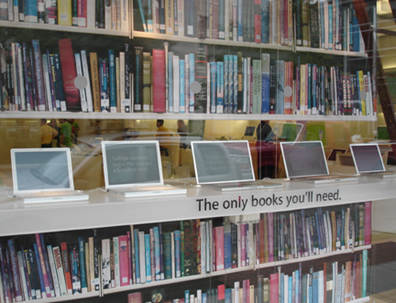 Just in case there are any students who still read books, the Apple Store wants them to know that paper technology is obsolete. After all, if it's not online, it's not important. Right?

Those "bookcases" behind the laptops are just photo flats.

There's another photo and more commentary here, on the amazing photo-sharing site Flickr.

Turning Up the Heat

As part of the energy bill, Congress is barreling ahead with a plan to extend Daylight Saving Time for a month, despite protests from the airlines, which argue that the switch would cost millions and put their international schedules out of whack. The change would also generate lots of software updates, a further hidden cost.

The source of this bright idea is, not surprisingly, the ever-meddlesome Ed Markey, who calls the bill "a huge victory for sunshine lovers." As a certified sunshine lover, I'd say it looks more like Massachusetts's revenge on Texas (and the rest of the Sunbelt) for George Bush's victory over John Kerry. There are some places--and Dallas is definitely one of them--that need just the opposite: shorter sunny evening hours. Once the sun goes down and the temperature falls to the high 80s, you can actually enjoy sitting outside.

The ostensible goal of the bill is energy saving, but the evidence is weak. Reports Daniel Engber on Slate:

Springing forward has its trade-offs. When you set your clocks forward, you exchange morning daylight for a later sunset. Later sunsets tend to get people out of the house more in the evenings, which could lead to an increase in driving (and gasoline use) and a reduction in the use of household appliances. And if daylight time extended too far into the winter, more people would wake up before sunrise and turn on the lights. Government research from the 1970s suggests that extended daylight-saving time produces a modest but significant energy savings of about 1 percent. A British experiment with extended daylight time in the late 1960s failed to produce much corroborating evidence.

Oddly missed even in fairly thorough accounts is any consideration of the extension's most obvious cost: More demand for energy-eating air conditioning in the fast-growing, very hot Sunbelt. A lot more people live down here than did back during the Nixon administration.

The Most Irritating Federal Law

It may not be the most important, but the Wright Amendment gets my vote for the most irritating federal law. Passed to protect then-fledgling DFW Airport, it limits flights from Love Field, the smaller in-town airport where Southwest is headquartered, to contiguous states plus (thanks to a later amendment) Alabama, Mississippi, and Kansas. Thanks to this protectionist legislation, I live 15 minutes from Love Field and get to use it once a year if I'm lucky.

After years of "passionate neutrality," Southwest is campaigning to repeal the Wright Amendment, and there are bills in both houses of Congress to do just that. Southwest is a Dallas-based company and Love Field is inside the Dallas city limits. You'd think city officials, who never miss a chance to campaign for downtown development, would be working hard for repeal. But, thanks to American Airlines' clout, they're silent.

In hopes of rousing their interest, my latest local column, a guest editorial in D Magazine, makes the parochial case against the Wright Amendment. The Future and Its Enemies makes the global case.

The Dallas Morning News' extensive coverage of the issue is here. I wrote a related NYT column in December.

A major reason for sparse blogging of late is that I've been giving myself a crash course in economic sociology. What's that? you ask. For an introduction, read the resulting article, from yesterday's Boston Globe Ideas section.

If you'd like to know more, check out the websites of Mark Granovetter and Ezra Zuckerman. And if you're interested enough to spend money, order The Handbook of Economic Sociology.

You're Getting Some Style, Dude

The aesthetic ratchet effect has come to Dell computers, reports the A.P.'s Matt Slagle. He quotes industry analyst Roger Kay, who makes a common point: "As the market gets to be more commodity-like you need to distinguish yourself in whatever way you can."

That's inarguable, but it's not what's happening here. Dell's distinguishing characteristics are still price, customization, and quick turnaround, not design. Like USB ports or color monitors (remember when those were new?), good looks--or what Kay calls "design drama"--have simply become part of the package computer buyers expect, even in a commodity machine.

Any readers who are attending the Academy of Management meetings next month might want to check out the BPS/TIM panel, "High-tech and High-touch: Exploring the Role of Fashion and Aesthetics in Technology Markets." I'll be a discussant.

I'll be on Debbie Millman's Internet radio show, Design Matters, at 3 p.m. ET today (Friday). You can listen live (and call in) or download the show from the archives, which are full of interesting conversations with design luminaries.

I've just dipped into Ron Bailey's new book, Liberation Biology. As expected, it's proving to be a thoughtful, provocative, and well-written look at the issues surrounding rapidly advancing biomedicine. If biotech opponents are at all sincere in their frequent calls for thoughtful public discussion of what's at stake, they'll take it seriously. (Bill McKibben, for one, does.) Buy it here.